Anyone who watches baseball can tell you, in old-fashioned anecdote, that everyone’s striking out. Currently, teams are striking out in 23 percent of their plate appearances. In April of last year, that number was 21.7 percent. In April 2016, 21.3 percent. Slowly but surely, we’re reaching a game of the Three True Outcomes—or, more accurately, Two of the Three True Outcomes. Just not the two you’d think. And the approach from the mound might tell the story.

Quick disclaimer: For the sake of my own sanity, I’m not taking the deep dive into the “launch angle revolution” and its correlation to strikeouts here. Instead, I suggest reading up on the piece Eno Sarris just wrote for The Athletic (subscription required). It was helpful for me in writing this post, and it gives a bit of the hitting perspective that I won’t touch on here.

Back to the mound. Despite more strikeouts and fewer hits, walk rates are climbing too: 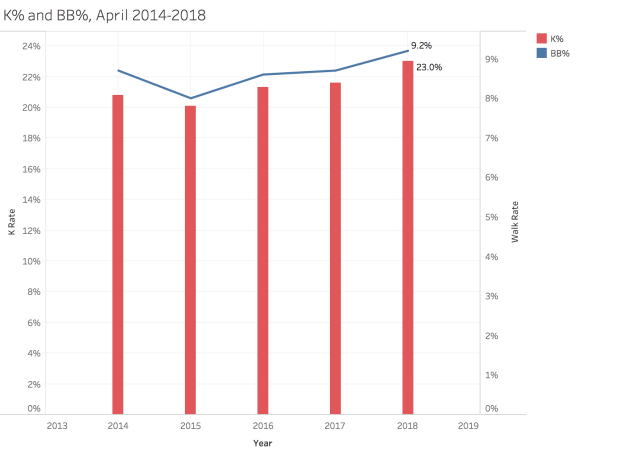 As previously mentioned, MLB’s collective strikeout rate was 21.7 percent in April 2017. Its climb to 23 percent in April 2018 is striking, and yet just as striking is the jump from 8.7 to 9.2 percent in the April walk rate. Perhaps it’s a small sample size with 2015 also being an outlier season, but generally the walk rate has been near steady (or climbing) before jumping up in 2018.

Conventionally, one might assume that more strikeouts mean fewer walks—less plate discipline perhaps, more of a “swinging for the fences” approach. Because this isn’t the case, it makes more sense to look at what’s happening from the mound. Why are we seeing more strikeouts and more walks?

Let me take one moment to give thanks to Ben Lindbergh and his Ringer piece that truly inspired my dive down this rabbit hole. Thanks to his work (and without riffing off it), I can say the long and short answer to the question is that pitchers are throwing more pitches out of the zone. Because Ben is much smarter than I am, his post features potentially all the information and beautiful visuals one could want on this subject. (And it’s really difficult being a full-time college student while trying to study the intricacies of pitching, let me tell you.)

This explains the walks fairly easily. If hitters aren’t in the mood to chase, good luck. Strikeouts are also pretty easy to draw from that if the opposite is the case. All of these pitches outside the zone trace back to pitchers’ increasing reliance on off-speed stuff (or off-speed and breaking—do I distinguish?), according to Lindbergh.

There are some interesting takeaways from this. In recent Aprils, MLB average contact rates have been on the decline:

While perhaps not a significant trend on a larger scale, this attests to the simple fact that the ball is in play less often. More than that, pitches out of the zone lead to weaker contact; Lindbergh goes into more detail on this with numbers on wOBA for pitches in and out of the zone. By inducing weaker contact, pitchers can better prevent hits. This additionally helps explain fewer hits early in this season, though the below average temperatures should be noted as well (especially for home runs).

Furthermore, this trend has interesting consequences for pitchers. If they’re working to get hitters to chase, it inevitably means deeper counts, and this in turn means more pitches per plate appearance. Lindbergh illustrates the sharp increase in average pitches per PA that’s taken place since 2016, climbing ever closer to four.

This is where one might begin to wonder where the tipping point is. Strikeouts may be dominating the game right now, but the approach with which they’re achieved is inefficient unless pitchers are inducing more weak contact than whiffs. Chronic inefficiency will wear starters down faster, even those who are relatively successful in their outings. No-hit bids are becoming nightly news, but no-hitters likely won’t be Maddux-esque. The strike zone is out of style. Pitchers are going to pay the price even if basic outcomes say otherwise.

What does this mean for hitters? Is there a point at which they become more selective in their approach? One major hitting philosophy making the rounds focuses on making quality contact. Matt Carpenter, a True Outcomes extraordinaire, follows this process—if it’s close to the edge of the zone, he’s likely to refrain because the contact will be weak. He’s sporting a 19.6 percent walk rate and absurd 25 percent strikeout rate, testaments to the close pitches he’s watched go by. For what it’s worth, he’s also making very little soft contact (7.8 percent soft contact rate, according to FanGraphs). These numbers have yet to be softened by a season’s worth of plate appearances, but they’re following his recent season trends. While Carpenter can’t speak for the league, it’s safe to wonder if this is the profile others will begin to fit if they don’t already.

Also, what does this mean for bullpens? Compounded with the strategy that avoids pitchers seeing batters a third time around, high pitch counts earlier in games mean increasing calls to pens. What kind of effect will this have down the road not only for starters but for weary relievers? This is just another of many questions to ponder as this trend continues.

If you’re anything like me, you’ll continue to enjoy pitching duels and truly satisfying swings and misses. If you’re bored without bats, buckle down for a long season.